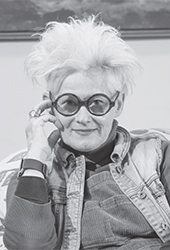 Dr Margi Brown Ash www.margibrownash.com is a multi-awardwinning theatre maker and therapist for artists based in Brisbane and Sydney.

Margi is co-artistic director of The Nest Ensemble and Force of Circumstance, multi-award winning independent companies that produce new works to promote change. Their latest productions include the multi-award winning The Belonging Trilogy consisting of HOME, Eve and He Dreamed a Train. When not making theatre, Margi is an experienced psychotherapist for artists, with an established coaching/counselling studio called 4change coaching www.4change.com.au.

Margi’s Ph.D. brings theatre and therapy together to explore the concepts of home and belonging and one of the outcomes is the RIC Process: Rituals of Practice, specifically designed for artist’s health and wellbeing. Margi regularly teaches Rituals of Practice to acting students at QUT Acting Academy, Curtin University, Queensland Creative Industries Academy and private clients.

She regularly facilitates month long residencies based on her Rituals of Practice at Arteles Creative Center in Finland. Margi is a public speaker, facilitating at Brisbane’s WOW Festival and Communicating the Arts Conference in Montreal, 2019; she MC’d for QUT’s WorkSmart Conferences for several years and hosted the 21st Australian Dance Awards.

In 2018 Margi was Lifestyle Ambassador at State Library Queensland and Artist in Residence at Curtin University. In 2018 Margi co-presented (with her long-term collaborator Assoc. Prof. Leah Mercer) their latest work-in-progress at Taos 25th Conference, Mexico, using the RIC Process as methodology. Margi was an inaugural member of the National Artistic Team at Queensland Theatre 2016, 2017; a member of Actors Equity since 1977 and an Associate at Taos Institute, an international organisation that researches collaborative excellence.