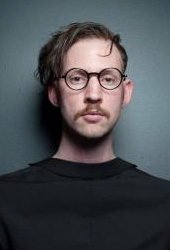 Tobias Manderson-Galvin is a contemporary Australian playwright, poet and performance maker, best known as co-Founder/Creative Director of MKA: Theatre of New Writing. Tobias has a reputation for shocking his audiences on and off stage. His stage work often draws on real or adapted stories of human misery, politics and sexuality in a style that is usually considered black-comedy. He’s been called ‘unstoppable’ by the Age, ‘exceptional’ by AussieTheatre and ‘Toby’ by his parents.

Tobias won the St Martins National Young Playwrights Award 2009 for dogmeat. He was commissioned by the Traverse Theatre, Scotland to write a partial draft of The Body of an Unknown Man on Somerton Beach in 2012 and in 2013 won a RE Ross Trust Playwrights’ Development Award for the further developed text, the Unknown man on Somerton Beach. Tobias was an Australian playwright delegate at World Interplay 2009, an Open House Resident Artist with Canberra Youth Theatre in 2009, and sat on the Platform Youth Theatre board, including as chair, for some years. Tobias has written plays, poems and performance pieces for radio, theatre, live performance, spoken word, dadaist grime-core rap, stand up comedy and screen. His work has been performed internationally on stage, screen and radio.

Tobias holds a Bachelor of Arts: Cultural Studies/Politics (Swinburne) and in 2012 completed a Master of Writing for Performance (University of Melbourne). He is currently working on a number of new stage works including a bio-play of King Charles II and is acting as dancer/dramaturg on Personal Mythologies (Next Wave 2014) and Psycho (Balletlab/Shian Law).

He lives in Richmond, with his sister, the two of whom occasionally produce work under the banner of ‘The Jolly Good Show’.