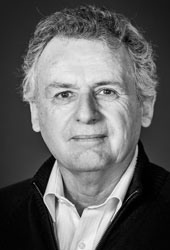 Michael played Sorin in the “now look here” production of The Seagull in 2015. He is proud to be on the board of 4MBS.