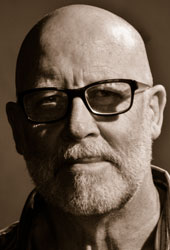 Steve Mayer-Miller has spent 32 years working professionally in theatre, film and design, collaborating with communities throughout Australia, India, the UK and the Asia Pacific region. His theatre training was in London with Theatre Complicite. He began his community practice at Cabramatta Migrant Centre in 1982 working with several communities and newly arrived refugees in the creation of new theatre works.

In 1990 he set up the Mackay Deaf Theatre. In 1997 he went on to establish Crossroad Arts and has led its development from a small community arts and cultural development organisation in Mackay to one that now works across Queensland and in the Asia Pacific region. During that time he has produced over 60 new works across different art mediums, including Melek mo Hani, Letters from River Street and the film documentary Stori blong yu mi. In 2011 he travelled to India to co-write and co-direct the play With Love with Mallika Sarabhai on the life of Indian poet Rabindranath Tagore. The success of the play led to a national tour of India. In 2013 he travelled to Fukushima Japan where he made a documentary on people with a disability affected by the earthquake and nuclear reactor disaster.