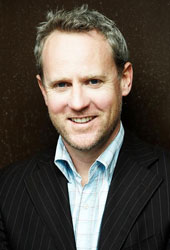 Jo is a writer, director and actor. He is a graduate of Melbourne University (B.A/B.COM) and the Ecole Internationale de Theatre Jacques Lecoq.

In 2012 he was an artist in residence at the Sydney Theatre Company where he was commissioned to write In a Heart Beat. His other theatre credits as a writer include Max Remy — In Search of the Time and Space Machine (ATYP), Ishmael and the Return of the Dugongs (ATYP and Riverside Theatre); The Window (co-author) (Arts Asia Pacific — Brisbane, Adelaide, Japan); Mademoiselle Fifi (Darlinghurst Theatre); Bookends 08 (ATYP and Sydney Writers Festival); Bookends 07 (ATYP and Sydney Writers Festival); Don’t Stare too Much! (Darlinghurst Theatre), Dead on the Ground (co-author) (Hoipolloi — National UK tour); Brainstorm (co-author) (InTransit Theater — National Swiss tour). He was also co-writer of the 2013 Helpmann Awards ceremony.

In 1994 Jo was awarded a grant from the Ian Potter Cultural Trust to study at the Ecole
Jacques Lecoq.