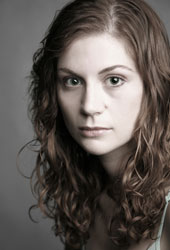 Kathryn is a respected young playwright and actor from Queensland. In 2013, she was engaged as a Playwright-In-Residence at La Boite Theatre Company, where she developed Pale Blue Dot, which was included in the 2014 main stage season, directed by Michael Futcher. She was shortlisted for the Queensland Premier’s Drama Award for her plays Other Countries and Conqueror and was the recipient of a Playwriting Australia Travel Exchange Grant in 2013 for Pale Blue Dot. As an actor, Kathryn has performed in numerous productions with Queensland Theatre Company, La Boite Theatre Company, Bell Shakespeare, JUTE, and many independent theatre companies. Kathryn received a Matilda Award for Best Emerging Artist in 2009 and was engaged in the Emerging Artists Program at Queensland Theatre Company in 2009. She sat on the board of Associate Artists at Queensland Theatre Company from 2011 through to 2013. Kathryn has completed a Graduate Diploma of Writing, Editing, and Publishing (UQ) and a Bachelor of Theatre Arts (USQ) and is currently working towards her Masters in Creative Writing.