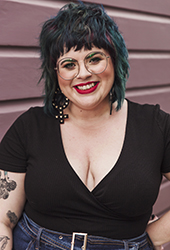 Claire Christian is a storyteller; a playwright, author and theatre maker, based in Brisbane. Her first novel, Beautiful Mess won the Text Publishing Text Prize in 2016 and was released in 2017. Her play Lysa and The Freeborn Dames debuted at La Boite in 2018 and is published by Playlab Theatre. She has had the great joy of directing Michelle Law’s smash hit comedy Single Asian Female since 2017. Her plays Talking to Brick Walls, Hedonisms Second Album and The Landmine is Me are available through Playlab Theatre. She is a member of the Mamas Boys Theatre Collective and is the writer and co-collaborator on their play Brothers Book Club. Her next novel, a pleasure seeking, queer romantic comedy It’s Been A Pleasure, Noni Blake will be released in October.