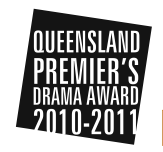 The Queensland Government, through Queensland Theatre Company, is seeking submissions from artists or groups of artists for the 2010-2011 Queensland Premier’s Drama Award. Artists are invited to submit material reflective of Queensland: its politics, people, culture, history and experience. Subject matter which also has ongoing relevance and wider resonances will be viewed favourably. The material may be submitted in a variety of formats – for example DVD, CD, written – and may take a variety of forms – for example political sketches, play, songs, cabaret elements, multimedia. It must be original material.

In July 2010 Queensland Theatre Company will select three finalists for further development. The finalists may be individuals or teams of artists. The process of development will include workshops with Industry Experts and a public presentation of the artists’ work. The artists selected will each receive a commission fee. In the case of a team being a finalist, the commission fee will be split between the members of the team.

The entry form should be completed in accordance with the conditions and guidelines for The Queensland Premier’s Drama Award –2010-2011. Completed entry forms and two copies of the submitted proposal must be:

For further information visit the Queensland Theatre Company's Website or call the Artistic Development Coordinator on (07) 3010 7607 or email efryberg@qldtheatreco.com.au