by Scott McAteer
She has a devil on her left shoulder, an angel on her right. She tries so hard to be good; but it's nearly dinnertime.

'Glutton for Punishment' was written in collaboration with a recovering eating disorder survivor. It is a darkly comic portrait of one girl’s struggle with different pressures, represented in the play by a Devil and an Angel.
As eating disorders are often thought of as being a consequence of fear of growing-up, the play includes childish squabbling and Mr Wolf, a character from games and fairy tales, a character who makes dinner-time scary.

'...reminiscent of the Mad Hatter's tea party in its colourful and childlike interpretation of one girl's battle with the demons inside her... plenty of humour and well-delivered comedy. A slightly surreal take on a traditional fairy-tale, the play was fresh, entertaining and lively.'
www.theprogram.net.au

'...a funny and macabre fairy-tale of eating disorders... [the actors] all seem to realise what a gift they've been given with McAteer's script and throw themselves into it.'
www.aussietheatre.com 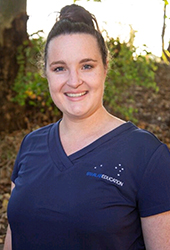