IN THE VIOLET TIME

IN THE VIOLET TIME

by Sue Smith
Set in inner city Sydney in 1931, and narrated by 12-year-old Violet, In the Violet Time tells the story of the Harwich family. Violet’s father, Liam, a Balkan immigrant, struggles to find work along the Hungry Mile of the Sydney waterfront. His efforts go unrewarded. When his wife, Lenie, meets Alex, the foreman at Pyrmont, she realises that there is one way she might help Liam find work—and, perhaps, restore a modicum of his shattered self-esteem. She enters into a Faustian deal with the dark and damaged Alex—she will grant him her sexual favours if he gives Liam work.

When Liam discovers the real reason why he, alone among his neighbours, is working, the family home erupts into violence. The impressionable Violet becomes haunted by dreams and phantoms. Locked into the grinding humiliation of Lenie’s ‘contract’, Liam seeks some kind of pyrrhic redemption through politics: in association with the newly formed Unemployed Workers Movement, he refuses to pay the rent, and barricades the family house when it is besieged by the police. Violet, meanwhile, through her association with a teenage Chinese fruit-seller, learns her own cruel lessons about loyalty and betrayal. During the siege of her home, she achieves a personal epiphany, only to see her newfound joy robbed in a moment of brutal tragedy.

One of eight plays selected for the 2008 Playwriting Australia Festival. 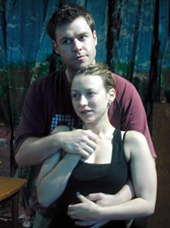