by Michael Butler
A funny, moving and realistic human drama, between these lines follows the stories of a range of characters as their lives intersect with both humorous and far-reaching consequences, proving that the simplest actions can have the greatest impact.

The play is constructed of ten interrelated stories that form one story: just as all of our lives are entwined in one larger drama. While each scene draws upon the Realist tradition of exploring everyday situations, ordinary motivations and common interactions, it is structured in a more overtly theatrical fashion, creating a dynamic and thought-provoking puzzle. 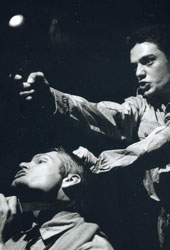