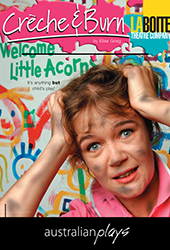 by Elise Greig
Sarah is a newly trained childcare worker, it’s her first day on the job and she’s as keen as mustard. But all the children want to do is play war, take their clothes off, wee on each other, start fires and have food fights. Then there’s the parents, a motley crew of single mothers, career women, stay-at-home mums, the grandmother who thinks the childcare centre is the equivalent of a dog kennel and the biker mum who believes breastfeeding is an act of cannibalism. Things couldn’t be worse.

Enter Robert, the weekend father. He’s a gentle guy who just wants to spend quality time with his daughter, but somehow ends up taking the childcare centre hostage. All this and it’s not even morning tea!