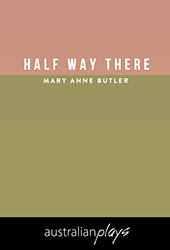 Harriet and Wes live at Half Way; a rundown pub-come-brothel smack-bang in the middle of the Northern Territory. They muddle along together; yet something’s not right. The landscape itself seems to whisper of past ghosts; of things left unresolved.

And then Sabrina turns up. Twenty years younger than Harriet, and cannier than Wes, Sabrina wields the new broom of Development. As the bulldozers move in, Harriet and Wes scrabble for a place in this new incarnation.

But development is no match for nature, and as Harriet’s ghosts from the past are unearthed, the landscape itself comes alive; spewing forth its long-held secrets…