THE GIRL WHO FORGOT TO SING BADLY 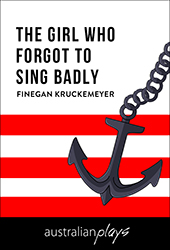 THE GIRL WHO FORGOT TO SING BADLY

by Finegan Kruckemeyer
This is the story of Peggy, and the packing, and the blizzard, and the boat.

Peggy O'Hegarty and her parents are packers. They pack one kind of thing, into another kind of thing. But one day the phone it forgets to keep ringing - because all of the people in her city are gone. So Peggy goes out to explore.

"Like a daydream born beneath a dining room table... The entire show hums with nimble, exploratory intelligence, captivating attentions and keeping pace with restless imaginations; a story of ingenious packers that always boxes clever" - Irish Times

The Girl Who Forgot to Sing Badly was commissioned by The Ark and Theatre Lovett (Ireland) and premiered in 2010 directed by Lynne Parker. It was the first children's show ever selected to be part of the ReViewed program at the Dublin Theatre Festival.