by Noëlle Janaczewska
Maxine Novak is arrested following a drunken brawl. The story hits the headlines. The champion swimmer’s future hangs in the balance. Everyone has an opinion and something to say about teenage drinking. But investigative reports, government initiatives and academic research tell only a part of the story of Australia’s uneasy relationship with alcohol—and its nexus with sport. SMASHED explores the different attitudes of young people to their use of alcohol and the phenomenon the media have dubbed ‘binge drinking’. 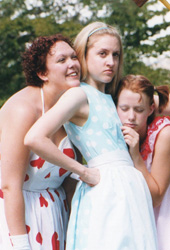