by Daniel Keene
In The Violin, a father, a mother and a child, stand huddled together, boarding a train for deportation. They speak in intercut monologues, dwelling on different things: the child fascinated by the moving patch of sun on her hands and feet; the woman's delight at the child lying between the parent's bodies and at hearing her man playing the violin next door.

The husband compacts past and present—there is always someone crying, he says, and stares down the looming existential void, likening humanity to the bristles on a brush. 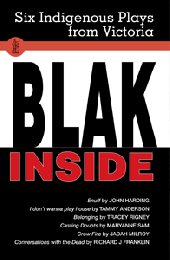