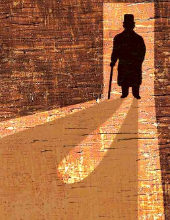 by Frank Gauntlett
The world breathed a sigh of relief in 1892 when Frederick Bailey Deeming was hanged in Melbourne Gaol from the beam that killed Ned Kelly.

Some thought Deeming was Jack The Ripper but the truth was no less remarkable—he was an international thief, philanderer, swindler, con man, bigamist and utterly ruthless murderer. Born in the abject squalor of a British madhouse and without formal education, Deeming juggled scores of identities, frequently passing himself off as a Lord. The case gripped and appalled the nation and the world.

Meanwhile, at the lavish Alexandra Theatre, actor/manager Alfred Dampier was desperate for a success and came up with the idea of Reality Theatre—a play plundering the Deeming story that would change as the chase and case progressed. Apparently by coincidence the cast included one Alfred Harford who had known Deeming in South Africa.

Dampier’s melodrama, called Willful Murder!, was a smash hit but as the frantic season progressed and the borders between terrible fact and gruesome fantasy crumbled, an awful possibility emerged linking the appalling urges of Fredrick Bailey Deeming and the colourful characters acting out his life—and all in the name of art.

"[Its] themes regarding the lust for notoriety are as relevant now as ever."
—Stage Whispers

Gauntlett’s play has it all. Truth. Imagination. Crime faction. Theatrical flamboyance. Linguistic in Technicolor, it affords an uncomfortably vicarious insight into what I can only think to characterise as sociopathic evil.... Well-written. Well-played. Well worth a look."—Crikey