THE WOMEN OF MARCH THE FIRST 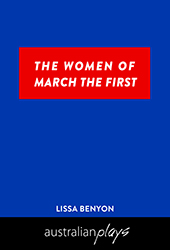 THE WOMEN OF MARCH THE FIRST

by Lissa Benyon
Three Russian women make bombs on the eve of March the First, 1881, part of the revolutionary group which assassinated Tsar Alexander II on that day. As the long night passes, they look back over their lives and their paths to this fateful point.