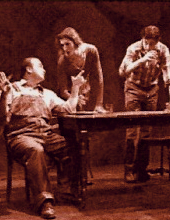 by Wendy Beckett
A play set in San Francisco, Mexico and eastern bloc Europe Modotti tells the story of photographer Tina Modotti and her life as a revolutionary.

Occupying the first half of the 20th Century when politics are explosive and social and political unrest a familiar everyday occurrence, Modotti takes us into one of the most exciting periods in history. In Mexico with her lover American photographer Edward Weston, Modotti finds her artistic voice.

When Weston leaves Mexico for America, Modotti becomes romantically involved with a revolutionary who is gunned down outside their apartment. Modotti’s newfound political awareness changes the direction of her life.

She is later arrested and tried for attempting to assassinate the Mexican president and sent into exile. On a return visit, at the age of 46 she is poisoned.

"Never a moment's lapse in concentration while watching a Wendy Beckett play...”—The Advertiser