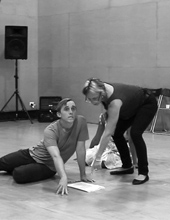 In rehearsal at the 2012 National Play Festival

by Gary Abrahams
Newlyweds, Therese and Camille, have just moved to Paris with Camille’s mother. Paris is nothing but hard work for Therese. She’s running a shop, humouring her mother-in-law and listening to her sickly husband’s plans for the railway administration. It all changes when Camille’s dashing childhood friend, Laurent, appears out of the blue. Therese and Laurent become lovers and plot Camille’s murder. But once they’ve committed the dastardly act, their dreams of happiness could not be further away as guilt manifests into hate and hate into murder, yet again.

In his adaptation of one of the 19th Century’s first great modern novels, Gary Abrahams captures the monstrous ethical and proto-psychological landscapes of Emile Zola’s writing. With sharp intelligence he distils class claustrophobia, mordant humour and haunting gothic suspense compel this unsettling contemporary drama of desire, aspiration and amorality.