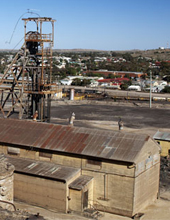 by Hellie Turner
Late May in a northern outback town, the kids are running wild and the patience of at least one member of the community has all but run out.

Co-op owner, Mick (third generation of the infamous Morrison family) is totally pissed off at the continuous stream of break-ins and graffiti - not to mention the mindless vandalising of his long-time hero and role model, John Wayne.

One night, he coerces a couple of ‘born-and-bred’ mates, to join him at his shop, in order to lay in wait for the offenders. The moderate Darce has knocked around with Mick since they were kids. He’s more than a bit over Mick’s particular brand of arrogance. Lammy just does what he’s told - same as he always has. Poor intellect hasn’t equipped him so well to defend himself against Mick’s demands and abuse.

Over the course of the night, ignited by booze and bullshit - the tensions of bad ancient history between the would-be vigilantes are fired up. The night is littered with a passing parade of Mick’s damaged relationships. Carmel - the sweetest root of his life. Raelene - his haggard and emotionally broken young wife. Ginger - town cop and once close friend. And Jodie - the best kept secret in town.

When the gung-ho Mick exacts a little ‘eye-for-an-eye’ revenge, the rot really sets in and Micky-boy gets a taste of his own not-so-sweet medicine.

And then... the ultimate act of payback.