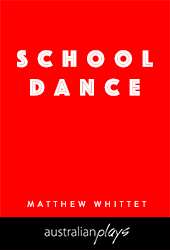 This is a story about 3 teenagers. Matt, Luke and Jonathon. They're meeting up before a school dance. They're on a mission. And they're losers. Matt has been pining for a girl in his class all year, and this is the night he's decided to finally ask Hannah Ellis to dance with him. But all three of them are on the lookout for their mortal enemy, Derrick Sturgess. The school bully. But when Hannah Ellis passes them by and heads into the dance, she sees Luke and Jonathon, but fails to see Matt. This sets off a chain reaction, and Matt starts to disappear altogether. He is no longer visible.

Jonathon and Luke freak out. Jonathon has an idea and goes into the dance to find his older sister Joanie. She tells him a tale of a girl in her year who disappeared the year before. She tells Jonathon to go somewhere safe until she works out how to help. Jonathon grabs Luke and Matt and they go on their BMXs to their secret place. The Point. Whilst the boys are there, Matt slips away. He meets the invisible girl Danika, and she takes him to the land of invisible teens. Here he is introduced to a strange and fantastical world, where shy, ghostlike teens wander quietly surrounded by the toys of their youth, from a time when things were simpler. But things in this land are much more dangerous than they seem.

School Dance is about acts of bravery. Of facing your own self loathing and coming out on top. It's a play which is written for ages 15 and up, using a very strong pop language inspired by 80's cartoons and John Hughes films.