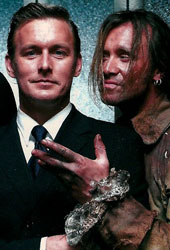 by Anthony Crowley
Steven Saken made his first million at the age of eighteen. Now on the cusp of the biggest business merger of his career, he is struck down with a mysterious cancer. On the same night he first becomes ill, a Muslim woman is savagely murdered outside his house and logic dictates he is a witness to the crime, although he denies any knowledge. Meanwhile two ghosts of Australia's convict past escape and set about trying to survive in a strange, terrifying new land while in the present - a detective slowly unravels the horrible truth of the woman's death and Saken's fateful illness