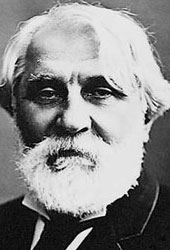 by Robert Dessaix
Act 1
An ageing attendant in a present-day Russian railway museum, Vassily, left to lock up, begins to hallucinate a version of what happened in the railway carriage behind him in 1880 when the famous writer Turgenev had an assignation with the actress Savina.

He has Gogolesque conversations with the female director before she leaves and with an apparition of the snappy young tech services manager Boris.

The museum is threatened with closure by the Mayor (with whom the director is having a dalliance).

Vassily then hallucinates a meeting with Turgenev himself and his raisonneur friend Polonsky. They argue about whether Turgenev, risking the love he has (for the opera diva Viardot) for an infatuation, should go to meet Savina in the train.

And in between Polonsky and Turgenev argue about the price to be paid for ‘love’, the nature of infatuation, and the disaster that threatens if Turgenev joins Savina in the train.

Vassily imagines a second version of what happened in the train.

Turgenev throws caution to the wind and leaves for the train.

Act 3
The Mayor comes to the museum to see about closing it down.

Vassily misinterprets the present carryings-on for his master’s in 1880.

There is a third rendez-vous in the carriage – actually between the mayor and the director – which Vassily takes to be the truth about what happened in the carriage.

The museum is closed down.

Vassily is carted off to an asylum.


A Mad Affair has been translated into Russian by the Moscow translator Victoria Ivanova with the collaboration of the author. The text of the play, provisionally entitled Безумная любовь, is available through Tatyana Korobkina at the Turgenev Library, Dept of Culture of the City of Moscow (director@turgenev.ru) or directly from the translator (victoria.l.ivanova@gmail.com).