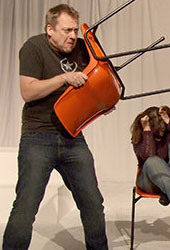 Ben is having a very good year. It just doesn’t happen to be this one.

Accepting an invitation to coffee by his best mate’s partner Angie, Ben’s life … lives … are about to be turned upside down. And not just by the price of a latte these days.

Angie is adamant they had an affair in a previous life. Having freshly re-lived the experience via hypnotic regression, more than once, she insists they confess to short-fused husband Richard.

At a pub, Ben tries to safely explain it all away as nonsense, when Richard reveals suspicions that Angie is seeing another man. A man he intends to find and injure grievously.

Angie and her therapist arrange a regression session at home, to repair tensions between a devastated Richard and a battered Ben. Ben’s girlfriend Donna is unimpressed with the whole situation, but is forced to go along with Angie’s exuberant reliving of yet another night of passion with Ben’s previous self.