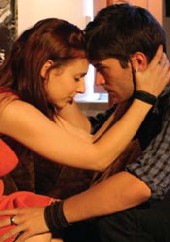 by Alan Grace
Berenger meets Katerin outside his Mum's church and they click because they both love Dostoyevsky. His brother Harst ribs him about getting together with a Christian. He says goodbye to his good friend Bella who is going overseas. Ber and Kat fall in love, and Ber starts by challenging her religious beliefs, but begins to appreciate her wonderful mind. Bella returns after they are very in love, with the news that she is pregnant, and she doesn't know which brother is the father; it might be either. When Ber comes home to tell Kat of the pregnancy, Kat has found a sheaf of letters from Bella which are full of love and beauty and a huge betrayal. The relationship crumbles. Bella wants to be with Ber but he can't handle it. Harst wants to be with Bella but she loves Ber. Kat forgives Ber for the letters but he can't tell her about the baby; when he finally does, Kat loses it and they have a huge sad fight. Kat goes to Harst for solace, they get fucked up and have sex. She calls Ber mid-sex and tells him what she's doing. In darkness, he scrawls on the wall a cry to help for Jesus. Bella arrives at Harst's the next day to say she'll be with him, but she finds Kat there instead. The final scene all four arrive at Kat's house; they fight, and the situation gets physical between Kat and Bella; Bella falls, possibly injuring the baby. There is a tense standoff. Dostoyevsky is the main motif of the play as the characters join because of his work, then their lives spiral into a Dosty-like novel. 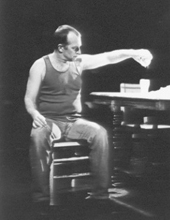