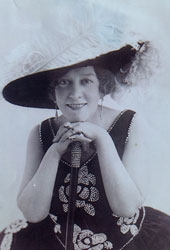 by Penelope Upward
This is a biographical musical play about the colourful life and times of famous music hall performer and pantomime star Florrie Forde, born Melbourne 1875, died Aberdeen Scotland 1940, after singing to wounded sailors two months before the Battle of Britain. After four years learning her stage skills in Australia, Florrie sailed for England in 1897 where she became a household name. From 1903 she made 700 recordings and was in pantomime for 35 years; her work is recorded in major collections of libraries in Australia, as well as the Victorian Arts Centre, National Film and Sound Archives, the Australian Dictionary of Biography, the British Film Industry (BFI) and the British Library. Florrie Forde was the writer's grandmother's elder sister.