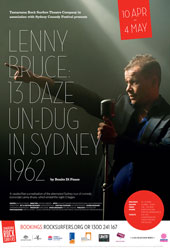 by Benito Di Fonzo
In September 1962 controversial US comedian Lenny Bruce followed his successful season at Peter Cook’s ‘Establishment Club’ with what was intended to be a two-week season at Sydney’s Aaron’s Hotel. Legendary music promoter Lee Gordon had lured Lenny on the promise of a US$2000 a week pay-cheque. However Sydney was not Soho and at Bruce’s first 11pm show there was uproar, abuse, and condemnation, followed by a sensational trial-by-media beginning with a doctored photo on the front of the next morning’s Daily Mirror of Lenny giving a Nazi salute. Things went downhill rapidly from there. Aaron’s and every other hotel in Sydney were threatened with losing liquor licenses if they gave Bruce a gig. Shows hastily organised at the universities of Sydney and NSW by The Sydney Push and Richard Neville were cancelled at the last moment by Deans. Even the ABC bowed to increasing political pressure, cancelling his scheduled TV appearance despite staff protesting.

Bruce was left wandering Kings Cross in search of jazz, which he found, until Gordon finally secured the Wintergarden Theatre in Rose Bay where Lenny was finally able to give a full performance.

After thirteen days Bruce slimly avoided arrest by flying back to the United States.