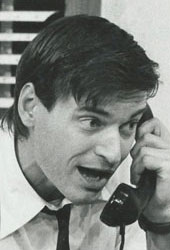 by John Upton
Today is a normal day - yet a day unlike any other - for the journalists on The Gazette, a newspaper in Sydney’s western suburbs. Today is edition day – but it’s also the day Rupert Murdoch pays a flying visit. Rupert will sort out a feud between the Editor In Chief and the Managing Director in this backwater of the News Corporation’s worldwide empire. Rupert is known for his deep knowledge of every area of his vast corporation and his fanatical attention to detail. For years he has let the left wing leaning Damien Lee run the 20 newspapers in this suburban chain on hard news and high standard journalism, which has been immensely profitable. But now profits are lagging and the new Managing Director insists it’s all Damien’s fault. Who will Rupert support? How will the nervous journalists handle his visit? What is the future of this isolated outpost?

This play looks at the dilemmas of modern journalism in a world where profits rule, and at the idiosyncrasies and crafty manoeuvres of reporters trying to keep the public informed. Theatregoers will readily identify with its suburban setting.

Waiting For Rupert Murdoch was joint winner of New Theatre’s 50th anniversary play competition, and has a cast of six – three women and three men.