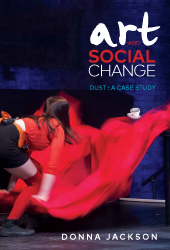 by Donna Jackson
Dust is a peek into Australian homes from the not too distant past, when families were overtly exposed to asbestos through domestic products like toothpaste, playdough, hair dryers and cigarette filters – all made with asbestos!

This fast-paced multi-media theatre production takes its audience on an almighty journey. Set in two parts, Dust delivers a roving performance incorporating sideshow, rock ‘n' roll, film and a vortex of dust! A traditional approach unfolds for the second half, featuring musicians and a choir. The production incorporates local stories and experiences with asbestos within each State.

By the 1950s a quarter of all houses built in Australia were clad with asbestos cement sheets. It was used by handymen to knock up a shed or to add an extra room on the family home until as recently as the late 1980s. Their overalls were washed by women and the asbestos dust residue swept up by their children.

Far from depressing though, Dust is joyous, touching and inspirational. Like the people who battled James Hardie Industries and won, Dust represents guts, determination and the Australian fighting spirit.

'This is work that's neither earnest nor polemic... It's straight up, moving and enormously entertaining.' – The Australian

'A night of powerful theatre. Go see it'. – Ballarat Courier

'One of the best experiences I've had in the theatre for a long, long time'. – ABC Radio Gippsland

NOTE: The script for Dust is published in Art and Social Change, which features learning resources, a behind-the-scenes look into the creative process and a reflection on the impact of this transformational project by its creators. Extensive production notes, music and documentation is provided with the script, along with music files and a documentary, Making Dust, which are made available for download via links in the digital publication.