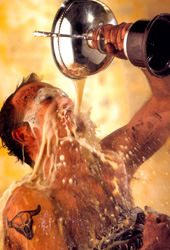 by Ian Wilding
Torrez knows how to kick a football. But at thirty-something he’s on the wrong side of his playing career. His frazzled manager Foxy believes a media career beckons, but there may be one too many skeletons in the Torrez closet to get this sporting legend on primetime in the way they’d like. And then there’s the terrible possibility that one of the skeletons has fallen out of the closet and is waiting at the front door for an autograph.

A raucously funny exposé of the world of celebrity and sport, and the longings at the heart of Australian masculinity. Features two of the worst-behaved men seen on the Australian stage for a long time.