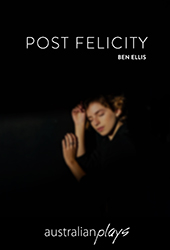 by Ben Ellis
An hilarious and savage satire of three baby-boomers fighting over a legacy of their own making.

When Robert James learns that his daughter Felicity has committed suicide, he seems not to comprehend. He may have been difficult to contact, he’s a busy man. But he’s a public servant, he shouldn’t have been hard to find (‘there aren’t many of us left’). His boss, similarly unperturbed by the news, sees suicide as an ‘inappropriate waste of human resources’. And Felicity’s mother Madeleine does not even remember if she was told. The three become distracted by dinner and the price of art and the battles of their 1960s youth. But should they be concerned about a suicide note?

Winner of the inaugural Malcolm Robertson Prize and the Patrick White Playwrights’ Award.