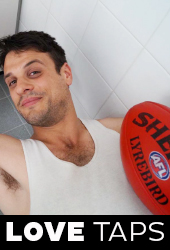 by Anna Lall
"A love tap is the bit of a nudge you give your opposite number behind play and you hope like hell the umpire isn't looking."

Love Taps takes a darkly humorous look at the intensity of the bonds formed between an AFL coach and his best players. Star full-forward Jesse Cosgrave deals his coach and two best mates one hell of a love tap: he's coming out as a gay role model on 60 Minutes.

But a few more love taps will be dealt on this drunken boys' night out in an inner city bar that no one saw coming - Gavin doesn't know this is to be his last season, macho Mitch will be forced to question his own sexuality, and coach Nigel is maybe a tad too fond of his "boys". Hence Wanda, the feisty bartender who takes no prisoners, bears witness to some very secret men's business.