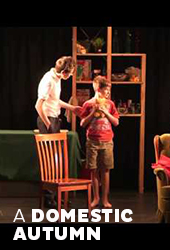 by James Watson
Derek and Skye are an unhappily married couple, sick of their boring suburban life and surrounded by unspoken tension. When Derek's friend John comes to stay and recover from a failed suicide attempt, the tension breaks, leading to arguments and eventually violence between Derek and Skye. In the middle of all this conflict is their 8 year old son Oscar. Despite initial fear and mistrust on both sides, eventually John and Oscar form an unlikely bond and learn to open up to one another about their respective problems, and hopefully help each other in this difficult setting.

Eventually by the end of this short play John learns to love himself again and be responsible, while Skye leaves in anger; letting the other characters wonder if she'll ever return...