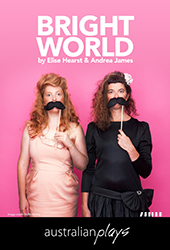 ‘At a meeting of the Australian Aborigines’ League a resolution was passed voicing, of behalf of the aborigines of Australia, a strong protest against the ‘cruel persecution of the Jewish people by the Nazi Government of Germany, and asking that this persecution be brought to an end.’

Half a world away, after a lifetime advocating for the rights of his own people, Yorta Yorta leader William Cooper leads a deputation to the front door of Melbourne’s German Consulate. His message – the persecution of the Jewish people must stop.

Nearly eighty years later, two playwrights come together on page and stage to explore the legacy of their ancestors in a unique cross-cultural collaboration.

What makes a hero?
Who can pull off the best 90’s flashback?
Whose dog is smartest?
Whose oppression largest?

From Austria to Australia, from a Deb Ball in Benalla to a Brighton Bat Mitzvah, Bright World is a genre-bending trip into the heart of our history-making.