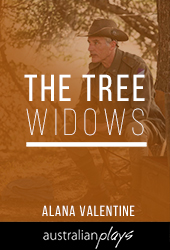 by Alana Valentine
Included in the Of the Island Collection

The Tree Widows is a verbatim-inspired, community collaborative work commissioned by Tasmanian community group The Friends of the Soldier’s Memorial Avenue, the Hobart City Council, and the Tasmanian Theatre Company. The Soldiers Memorial Walk is a serene avenue of 520 trees planted in 1918 and 1919 after the First World War for Tasmanian soldiers who died in that conflict. Over the last century the Avenue fell into disrepair, had trees removed and plaques lost, and sections derogated and lost. In the early 21st Century the Avenue was resuscitated by a dedicated community group called The Friends of the Soldier’s Memorial Avenue who cleaned up the site, reinstalled plaques and resuscitated community interest and commitment to the preservation of the site.

The brief for the play of The Tree Widows was to tell the story of this living memorial avenue of trees, up on the Hobart Queens Domain. A contemporary theatre maker conducted interviews with numerous members of the Soldier’s Memorial Walk community and compiled them into a series of monologues that tell the soldiers stories and find parallels, resonance and profound emotional connection with the contemporary families. In this way the stories dramatize the experience of memorial, memory and family history as it relates to this magnificent avenue of trees and, cumulatively, provide a profound insight into the ongoing effect of war on a small community.

The presentation involved four performers who performed a variety of monologues while standing next to the tree which was planted in memory of the soldier. Audience members were guided to walk from tree to tree, like a kind of pilgrim’s walk.

Winner of Best Writing in a Professional Production at the 2017 Errols (Tasmanian Theatre Awards) and Judges Award for 'creative integration of community, culture and heritage’. 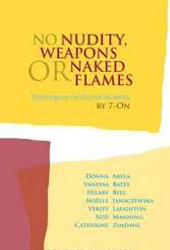 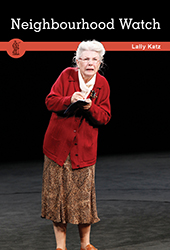