JUST OUT OF YOUR GROUND 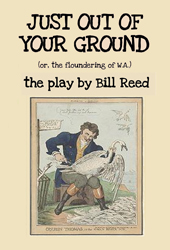 JUST OUT OF YOUR GROUND

by Bill Reed
‘Just Out of Your Ground’ is a contemporary account of the life of one of the founding fathers of Western Australia… Thomas Peel, an aristocrat and first cousin of the British Prime Minister Robert Peel. He was the leader of the first organised group of settlers, but from the moment he arrived on Australian shores, he became the butt of ridicule and contempt.

He seemed utterly unable to marshal himself to provide the leadership and employment to his hundreds of artisans, labourers and families. Indeed, for one whole year, he seemed paralysed and utterly incapable of moving even from the beach he landed on, while on another beach his people were dying of starvation, scurvy, dysentery and exposure. Finally, his people had to desert him as quite mad.

His wife and daughter also deserted him, leaving him saddled with his mother-in-law and his wife’s love child. For thirty-six years he stood a lonely, haughty and solitary figure blinded to his failings.

Finally, at old age, he suffered the indignity of being brought before the magistrate for some decrepit and unspecified sexual misconduct against his haggard housekeeper,

The play is primarily concerned with Peel’s inability to leave the beach to confront the dark heart of the then Australian landscape, that physical opponent in which there are no lineage selected for special treatment, no social status automatically qualifying for acceptance. There were not even any cricket practise pitches awaiting!