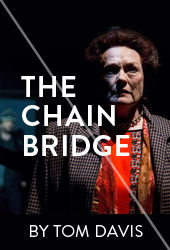 by Tom Davis
Imre is an ‘almost failed’ academic struggling to write the book about his family’s Budapest history that will save his career and maybe his marriage. If only he can he get the story straight. Then again, does he want to?

Over one night involving bad fish soup, Silberberg’s day-old bread and a lot of red wine, old scars are scratched open as Imre and his wife, Sarah, press Imre’s mother, Eva, and her oldest friends, Katalin and Jozsef, into revealing the truth.

The play hurtles us from an intimate dinner in inner-urban Australia, to the streets of 1956 Budapest, Nazi-occupied Hungary and sixties Melbourne dance halls, in an explosive collision of truth and lies, history, morality and shame.

As old refugees and their children scramble to find a way to love after surviving the horrors of the twentieth century, The Chain Bridge asks the question, 'Does history ever release us?'