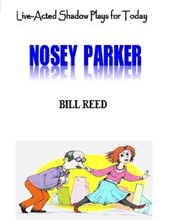 by Bill Reed
NOSEY PARKER
Hard to imagine what it was like growing up with a mother who was the terror of the town due to her obsession with other people’s noses and how those noses were so crying out for help. It was difficult enough to have to constantly ward her off at home, without, for example, watching her converse with people down the streets by peering up their noses… or walking with them with her finger up their noses like walking a pet… or telling the weather or their state of health by the appearances and colour of their discharges.
One day Wirths Circus came to town with all those elephants' long noses and those clowns with irresistible rubber honkers as hooters. That would for you be the end, too.
-------------------------
A REQUEST/REMINDER:
This script will naturally seem to place the Narrator as the dominant character/feature. This is not so. In reality, the focus of the audience will always be on the actions of the shadow players. As such, his role is secondary… even fading or becoming a mere voice-over… a kind of white music.
-----------------------