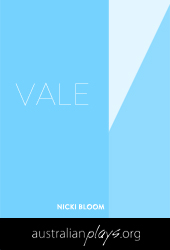 by Nicki Bloom
Joseph Vale is on top of the world. The self-made head of an eponymous hotel empire, he’s all set to spend New Year’s Eve toasting his successes and celebrating everything he has ever built. Along for the ride is his wife Tina, their newly graduated university educated daughter Isla and her ambitious young boyfriend Angus. Champagne corks pop, egos and ambition collide and the night catches alight with the arrival of an unexpected guest.

From the AWGIE award-winning writer of 'Little Bird' comes this dark-as-pitch comedy with a sting in its tail. Like a collision between the wit of Edward Albee and a modern Greek tragedy, Vale explores ideas of inheritance, ambition, and the way family never loosens its chokehold on anyone.

As Vale twists and turns, one thing becomes clear… this New Year’s Eve there will be fireworks!