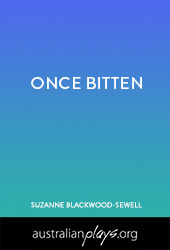 by Suzanne Blackwood-Sewell
On her 60th birthday Pixie announces to her concerned daughters that she is starting a new and exciting life in Africa – and with a man whom she met on the internet. However, fate deals a cruel blow and Pixie’s happiness is short-lived. When Pixie tells her daughters what happened, it would appear that "once bitten......." and Pixie gets the upper-hand.