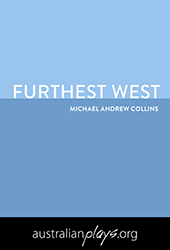 by Michael Andrew Collins
Sam and Riley have always dreamed of sailing out to international waters, of leaving Australia behind and finding out who they are when there’s no country and no history around them. When Sam’s parents decide it is time for her to move back to live with her Father, Sam convinces Riley to take their last shot at freedom. Together they steal Riley’s parent’s yacht and head out to international waters, where they will finally confront who they are and want to be to each other.

Meanwhile in Perth the Western Australian Government’s controversial Shark Cull policy is in effect. A fisherman, John, still reeling from the death of his young son, Tom, is fired from the cull. It is suspected he has been drinking on the job. But whether he is working for the government or not, and despite the wishes of his partner, Garry, John will continue to catch sharks, illegally and at night, because he is convinced that inside the stomach of one of them is the answer to the mystery of Tom’s death. His obsession and rage threatens to tear his and Garry’s love apart.

After the Yacht that Sam and Riley are travelling on stops transmitting a GPS signal, and after they do not return within a time frame that is usual for the girls sailing trips, Riley’s parents, Marianne and Robert, fear they have gone missing. A search is organized, but finds nothing.

A month after the disappearance there are still no clues, until the GPS tracker from the boat suddenly starts transmitting again. Robert, unsure whether it is a hoax or not, sets out to find the source of the transmission. This leads him to John and a confrontation between the two men’s rage, grief and responsibility.