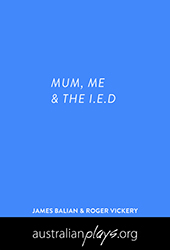 The play, based on real events, deals with the neglected issue of PTSD in young soldiers and the dark ripples that spread across their families and communities. Rob, an army medic, suffers PTSD and ‘time travels’ between home and Afghanistan. His anti-war mother, weary counsellor and vulnerable brother pull him in different directions. Crowe, his senior officer is tearing out the ‘stitches’ in his wounds. After Rob and his mother expose Crowe, Rob leaves the army for their remote family farm.

Plagued by guilt for not saving the life of Brownie, his best mate in Afghanistan and disturbed by his brother’s depression, Rob visits Jodie, Brownie’s fiancée, and learns his mate’s death was a ‘fake’ trauma. Then he hears Crowe has committed suicide. Rob is plotting suicide when his mother, who has undergone her own bitter journey, reaches out using poetry that bonded them long ago. The play ends with them entwined, their futures ambivalent, as the other characters form a shadowy tableau.