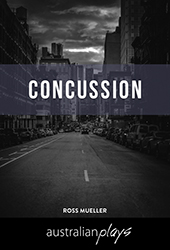 by Ross Mueller
Tragedy is an incident, comedy will be our landscape.

Somewhere in a busy city, a man wakes to discover he has forgotten his life. He has no memory of the past and no clear sense of the present.

He is concussed. Or so he is told by a doctor—who may also be his partner. Now there are flashes of something. Hunger, mourning, sexual appetite... Bob Dylan? But why isn’t he in hospital? And what of the voices, the Blackberry, the brothers? The hammer?

A comedy with attitude, Concussion explodes a simple conceit and scatters its achingly funny and filthy tales of the city like shrapnel.


"Mueller is surely one of the most intelligent, formally adventurous and emotionally brave playwrights now writing in this country." - Theatre Notes