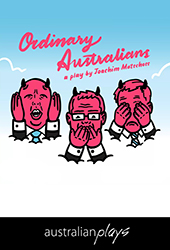 Kenny lives with his partner in a small town in NSW. He is employed at the roadworks. His partner is a Primary school teacher. The government is looking for 'Ordinary Australians' as part of an ad campaign and Kenny is just the ticket. He becomes the poster-boy so to speak and the opposition is interested in his services too. In the end he nearly becomes part of the government but decides to stand as an independent and gets elected as the first independent PM of Australia.

The play is inspired by the almost constant 'theatre' in the political world of this country.