THESE ARE NOT MY PEOPLE 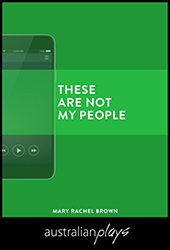 THESE ARE NOT MY PEOPLE

by Mary Rachel Brown
On the eighth of April at five seventeen pm, an incident of racial abuse occurs on a bus. Mobile phone footage of the abuse is uploaded on to social media at five thirty pm, by six o’clock the incident goes viral. The hunger for blame above resolution dominates the debate.

The perpetrator, the victim, the bystander and the person filming are thrown into a media storm.

Their actions and inactions judged.
Their privacy gone.
Their family harassed.
Their perception of the truth challenged.
Their ethics commodified.
Their safety threatened.

Behind the eight-seconds of footage exists four personal lives that are forever altered.
These Are Not My People questions the fine line between revenge and justice when it comes to social media shaming.