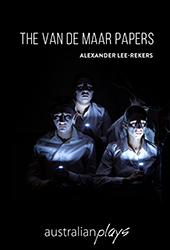 Levi Van De Maar – noted industrialist and self-made billionaire – has died, leaving friends and relatives to circle like sharks for their piece of the empire. When a stack of his memoirs are discovered with instructions they be published, his cold-blooded widow, the family black sheep, an out-of-luck publisher and an uninspired illustrator all vie for their shot at legacy.

The Van De Maar Papers is an epic story of family, reputation, and ambition. Bonds are formed, plans are hatched, empires rise and fall all over a dead man’s gift to the world – a thousand handwritten pages of surreal, hard-core erotica.