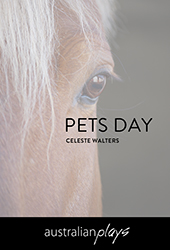 by Celeste Walters
Pets Day has been performed countless times, both professionally and in the classroom to great acclaim. It answered a need for simple plays for children age 4 to 7 that would involve whole class participation.

Here, the teachers play themselves, and the children the rest, often adding animal masks that they’ve made themselves.

Pets Day has been performed on radio in NSW and (often with two classes participating) at school festivals. It’s always a riot!

The idea for writing the play came when I was teaching in the Faculty of Education at Deakin University and one of my students was doing her 'country round.’ She said she wanted little ones to learn about ‘caring and sharing’ and what better way than to invite them to bring their pets to school. I suggested photos might be safer.

Well, the play says it all. Her ‘Pets Day’ was hilarious and continues to be.

A thing of joy for teachers, children and audience all . . .