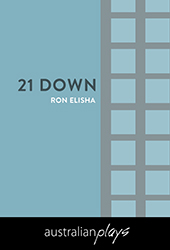 21 Down consists of a series of five scenes which take place on the 16th, 12th, 9th, 5th and Ground Floors of a 21-storey apartment block.

The scenes overlap in time, and the narratives that play themselves out on each level, whilst seemingly unconnected, are ingeniously interlocked in a manner that becomes apparent only as the play unfolds.

The central thread that connects all of these stories is the descent of Harry Lime who, at play’s opening, leaps to his imminent and inescapable death from the 21st floor past the windows of each of the residents on the levels mentioned above.

21 Down is a vertical farce – a play about the reality and the illusion of urban isolation – the notion that hundreds (if not thousands) of individuals can cohabit in a single apartment block without ever crossing paths or affecting one another’s lives.

It is a play about the line between caring and intrusion, between privacy and isolation, between love and estrangement.

All of this – played out in the blackest of humour – is lent a piquance and a sense of urgency that grows almost unbearable as Harry, in some four seconds of real time, descends to his death.