A NEST OF SKUNKS 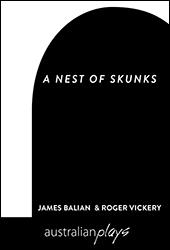 A NEST OF SKUNKS

by James Balian, Roger Vickery
In this unnamed country refugees are called “dirty skunks”. Thrown into congested processing centres, they face the daily threat of being deported at a moment’s notice.

Disgusted by their government’s behaviour, individuals have formed networks of “skunk handlers” to help escaped refugees elude this fate. The government, urged on by shock jocks, has responded by treating this civil disobedience as a serious crime. Immigration teams drive through suburbs and towns, searching for skunks and their handlers. Informers assist them.

Lily is a “short term” skunk handler. Last night Michael, her facilitator, arrived at her suburban home with two refugees − Stephen and his daughter Sam. They have just escaped from a detention centre and Michael needs Lily to care for them until they can be moved to a permanent safe house.

A fairly routine situation for Lily turns into a nightmare day for everyone when Michael arrives with Kristy, another skunk handler. The tension ratchets up as we see the situation from different viewpoints, including the elderly neighbour, Miriam.

This is the story of a father who must save his daughter from getting sent back. It’s the story of a woman who will keep her promise to them no matter what. It’s the story of a man, Michael, who will deal and double deal to get what is important – the means/ends dichotomy. It’s the story of a public servant who wants to do the right thing, but needs to protect herself in the process. Finally, it’s the story of an elderly neighbour who is so disoriented by the political changes around her that she swallows the whole anti-skunk propaganda until she meets the two skunks and realises they are people just like her.

In the end, only one person can make it possible for young Sam to remain safe.